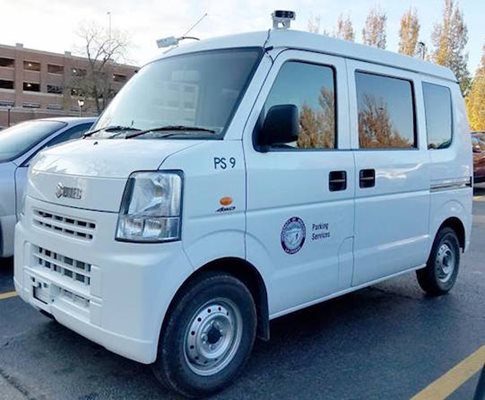 When Victor Hill arrived at the University of Wisconsin–La Crosse (UWL) in 2013, one of his top priorities was convincing the University of the benefits of License Plate Recognition (LPR) technology. Hill, the Director of Parking and Transportation Services, had been warned that he would have an uphill battle; colleagues at other campuses asserted that the then-touted 80% accuracy of LPR wouldn’t fly with university leadership. LPR had some other reputed issues – like iffy performance in snowy conditions – which also made for potential campus leadership skepticism.

Undaunted, Hill and his colleagues embarked on three years of conversations with universities like UW-Milwaukee who had employed LPR technology. His determination to know the “good, bad, and ugly of LPR” – along with due diligence in digging into product knowledge with both end users as well as T2 Systems and Genetec – ultimately paid off. UWL leadership gave the green light in the spring of 2016, and UWL installed the system in August of that year.

During the prior three years of research and analysis, Hill and his staff received a major takeaway from parking operators who had already installed LPR: allocate enough time to ensure the system worked before taking it live. They were strongly urged to take six months of testing prior to full deployment. UWL decided to make it a full year.

Like many universities, UWL had been utilizing a permit system that required the use of hangtags, a system that comes with the attendant issues of (1) high amount of staff time required to manage all things hangtags, (2) increased time/complexity of enforcement monitoring, and (3) ease of fraudulent permit practices. While still utilizing the hangtag permit system for the 2016-17 school year, UWL implemented LPR in the background, getting hands-on experience with the system while working out bugs specific to their use case.

“One of the things we learned when we were researching this was that we needed time to discover the bad license plate info we had in our system,” Hill said. “We gave ourselves a year to iron all that out. When we got a hit on a plate, we’d look at the permit info in our system, run a DMV check to see if that vehicle had an obvious relationship with that owner and then we’d associate it. If the relationship wasn’t clear or we couldn’t deduce that, we’d reach out to the owner and resolve those issues. We were writing tickets the first week of LPR implementation,” Hill continued. “Within the first month, we were writing them with confidence.”

Fast forward to the beginning of the 2017-18 school year when full LPR deployment would take place. Hill’s department had worked quietly but diligently over the previous months to get the word out that change was coming.

“Deployment was a difference maker, for sure. Frankly, I think we had a really easy time with it because everybody for the most part knew it was coming,” Hill stated. “One of the cool things we’ve seen is we have faculty/staff who call us now and say, ‘We have a loaner car today’ and we give them a temporary day pass.” Previously, those parkers would have had to remember to transfer their hangtag to that vehicle, which would have had plates that didn’t match the system – so for both UWL’s parkers and their parking office, it’s been a win-win. “All of the issues we’ve had have been very basic issues,” Hill continued. “There’s always stuff you don’t anticipate, special use cases, etc., but they’re minimal and easily handled.”

“Data management isn’t really a challenge,” Hill said, “but it’s certainly critical to fully utilizing the LPR system. The hangtag system required our full-time attention; eliminating that labor-intensive activity has enabled us to be more efficient with our time on the back end. That time has allowed us to prioritize the analysis of our data. We can now harness the power of LPR and the data it provides to make better decisions about our parking lots.”

That data not only helps UWL’s parking operations, but it has benefited its parkers as well. “We actually dropped the price of our permits this year because of LPR,” Hill shared. He went on to explain that as a self-sustaining University department, their overall bottom line is to maintain their level of service and serve their parkers to the best of their ability—not to churn fees in order to make a profit.

“As long as we’re maintaining our lots and providing a level of service, we’re doing our job. Through the analytics that T2 and Genetec’s Flex and LPR products provided, we realized we could sell more permits than we’d previously done. More permits and better enforcement also realizes more citation income,” Hill stated. “We looked at those numbers and realized we could drop our parking permit fees a little bit, and customers loved it.”

Currently, UWL’s parking operations have seen a 27% increase in parking citations over 2016, and around 17% increase in permit revenue, despite lowering fees. Hill believes UWL will see a full ROI in three to five years—”probably more like three years, but I tend to be conservative about revenue projections.”

UWL has a long relationship with T2, and T2’s integration with Genetec’s LPR software made UWL’s vendor decision a no-brainer. “There was no reason to go anywhere else. The integration with Genetec, the pay stations [UWL also installed Luke II stations with the LPR technology] with the Passport parking/smartphone app, it’s all been a huge timesaver for us,” Hill said. “Add to that the goodwill from our customer base, which has improved significantly – it’s had a great impact.”

And what about that rain, snow, and gloom of night thing that LPR has been dinged for in the past? While dark of night isn’t really an issue, “People are surprised when I say weather is not a challenge for us,” Hill asserted. “We’ve had great reads in all kinds of conditions, and we can enforce our campus in less than two hours.”

1. Don’t just dive into it – make sure you give yourself a minimum of six months to manage your bad data and iron your bugs out. You’ll find things that are unique to your operation that you need to adjust for.

2. Once fully deployed, LPR becomes the centerpiece of your operation. Don’t just look at how soon you’re going to start using it – look at how it’s going to affect everything you do. What will you do with your increased revenue? We looked at goodwill for our customers and service enhancements. Don’t just think profit – take a longer view of what you can achieve.

3. Get ready to educate your parkers. We put a short video on our site, and we also put out messages in a variety of platforms early and often. “Your plate is your permit” became our mantra, and it’s stuck. Updating campus signage is part of that education as well.

4. Consider what other equipment upgrades could be involved. Don’t catch yourself short at implementation by not having all the necessary integrations in place.

5. Understand that big-picture university plans can impact your revenue, either short- or long-term. Influences outside your day-to-day parking operations, like parking lots being taken over by university construction, will have an impact that you need to take into consideration.

6. Understand that your policies and processes will need to be adjusted, and there will be questions. We’ve taken the route of total transparency. If a parker comes into our offices with questions/concerns about the technology works, we simply say, “Come back here around the desk and we’ll show you. Or, if you prefer, ride along in the backseat with one of our campus enforcement officers.” Those answers usually catch people off guard and diffuse a potentially confrontational situation. And we’ve actually had a couple of people take us up on those ride offers. Their response: “Wow, this is amazing.”