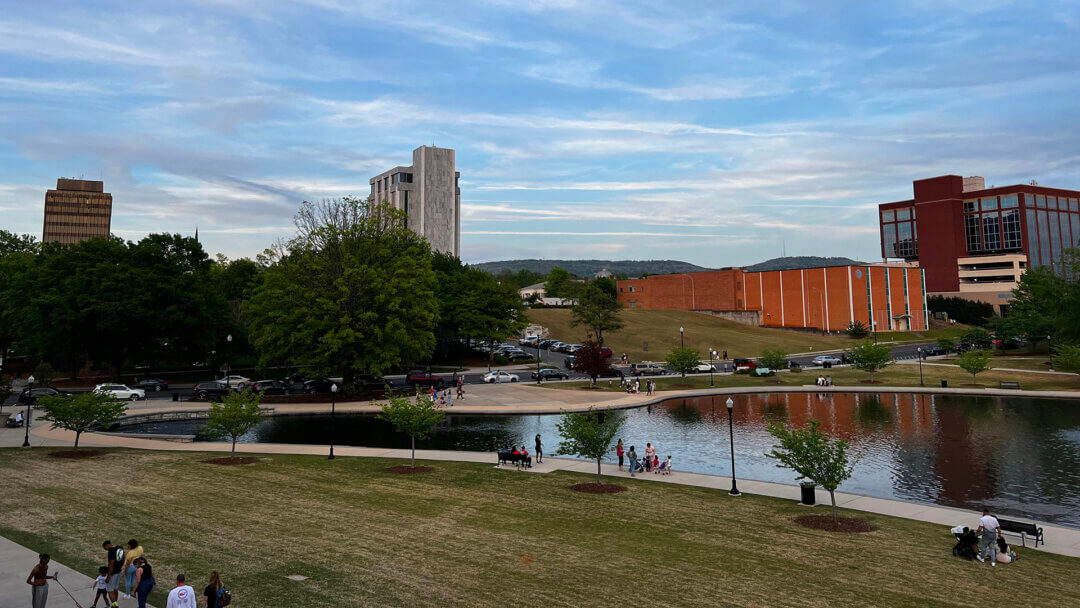 While Huntsville, Alabama, was established over two centuries ago, the city has really taken off in the past 60 years. In 1960, NASA opened the Marshall Space Flight Center in Huntsville. Its first mission was developing the Saturn launch vehicles for the Apollo program. Since then, the center has contributed to the Space Shuttle, the International Space Station, and a variety of research initiatives, earning Huntsville the nickname “Rocket City.”

It’s not all rockets, though – Huntsville also boasts a large number of defense jobs and more than two dozen biotechnology firms. Today, it is considered to be one of the top cities in the United States for high-tech jobs, home to many highly educated, tech-savvy scientists and engineers.

“It’s a very high-tech town but we had a very low-tech parking system,” said John Ashburn, Parking Services Manager for the City of Huntsville.

When Ashburn joined Huntsville’s Department of Parking & Public Transit five years ago, they were still using coin-only single-space parking meters. These decades-old meters “just weren’t very reliable,” according to Ashburn. They were often out of order due to dead batteries or coin jams. They also were not connected, leaving Ashburn and his team reliant on word-of-mouth to let them know when there were problems.

“We made a concerted effort to kind of push parking ahead,” Ashburn stated. “We knew we wanted to take credit cards. We wanted to have options for people to pay by app. So, we started exploring what our options were for that.” After moving forward with a bid process for new multi-space meters, Huntsville chose T2’s Luke II pay stations through reseller Creative Parking Concepts of Nashville, Tennessee.

To start, Huntsville installed three Luke II pay stations at a popular park downtown. Ashburn highlighted that the devices and T2 Iris back-office software were “very easy technology to adopt with very little headache on our end. We set them up, got them installed, got them configured, and they have worked from day one.”

From there Huntsville has expanded. They now have 35 Luke II and Luke Cosmo pay stations, most of which are used for on-street parking. However, they have also added pay stations to a few lots and in one of their garages. “We’ve looked at other ways we can use them because we like the technology,” Ashburn explained.

Huntsville has seen great adoption of the Luke pay stations, despite some initial hesitation from parkers. “With new technology, there’s always a little learning curve for the users, and some people were a little resistant,” Ashburn said. “But I think with a town full of engineers and rocket scientists, for the most part, people seem to jump on the technology pretty quickly.”

The T2 Luke pay stations have been a huge improvement for Ashburn and his team compared to the old single-space meters, especially on the back end. Before, technicians would have to bounce around from meter to meter to identify and resolve issues, communicating back to the office via two-way radio. Now, if there’s a coin jam or a communication issue, they get an alert in T2 Iris and the technician can respond immediately. Additionally, the pay stations and Iris software integrate seamlessly with Huntsville’s handheld enforcement devices, helping their officers be more efficient.

Huntsville has also benefited from the data and reporting capabilities available in T2 Iris. For example, revenue reports show them which pay stations are generating the most revenue, indicating which areas have the highest parking demand. “It gives us a lot more information at our disposal that we didn’t have before,” Ashburn stated.

“T2’s products work from day one. We’ve had minimal headaches, and when you’re adopting new technology, the biggest testimonial I can give is that it works out of the box.”
John Ashburn, Parking Services Manager

Reception from the public has been largely positive. Ashburn noted that most people love the pay stations, which he attributes to “the convenience of not having a dig through your car looking for a quarter, which I’ve done, and I think we’ve all done. It’s nice to be able to pull out a card, swipe it, and be on your way.” Another aspect that parkers appreciate is the extend-by-phone functionality, which allows parkers to extend their session via text message rather than going back to the pay station.

Ultimately, the biggest difference today for Huntsville Parking and its customers is the reliability of the equipment. “T2’s products work from day one. We’ve had minimal headaches, and when you’re adopting new technology, the biggest testimonial I can give is that it works out of the box.”