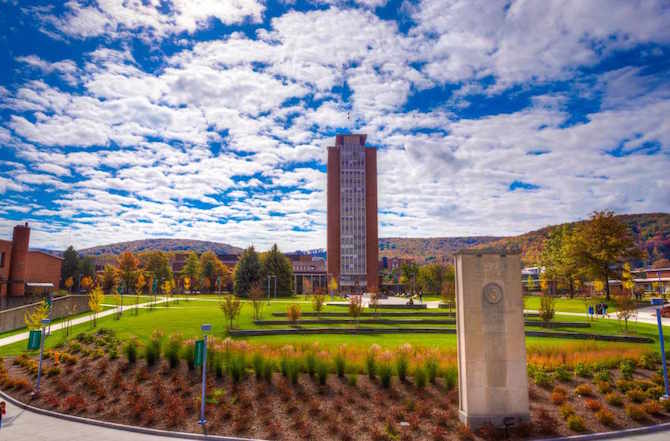 When she first became Director of Transportation and Parking Services at Binghamton University, Susan Crane faced a sobering reality: “Our parking services office was still operating in the 19th century.” As part of her goal to move this New York Division I university into the 21st century, Crane had some sweeping changes to make.

Those changes began with a migration from Binghamton self-hosting to having T2 Systems host their parking data. That migration allowed the University to upgrade T2 Flex/FlexPort and install T2’s mobile enforcement application—as well as supporting newer technologies like Genetec’s license plate recognition (LPR) software, AutoVu, and integration with the University’s meter and pay-by-cell company.

In other words, Crane and T2 were ushering Binghamton’s parking operations into the 21st century.

“Before we implemented LPR, we had different mechanisms for campus permits,” Crane said. “We had stickers, we had hangtags, and they meant something different from each other. There were differing kinds of permit regulations based on who you are, the time of day, the time of year, all of that. We have lots for residents and lots for commuters. If a parker had a hangtag, they could give it to a friend—which would make spotting violations very difficult. We tried to create something that would make things simpler, easier to understand, and much more efficient. When I saw the LPR technology, I knew this could really work at Binghamton.”

Initially outfitting one campus parking enforcement vehicle with LPR technology, things began to change quickly. The time it took to sweep campus, with lots spread across 930 acres, was significantly reduced.

The complexities of having lots of different rules and regulations became easily managed, as each lot’s data could be programmed into the LPR software. A second vehicle has recently been outfitted with LPR as well.

“This system is so much more efficient. It allows us to enforce in a way that is fair and equitable across the board,” Crane stated. “With the elimination of stickers and hangtags and the move to using a vehicle’s license plate as the permit, it all becomes pretty cut and dried.” Online permit sales have also been significantly impacted. With no stickers or hangtags to distribute, parkers need only to go online and input their license plate number and other information in order to generate their parking permit. “Last year, online permit sales were 37% of all permit sales,” Crane shared. “This year, it’s 78%, which has decreased the amount of traffic into our office for permit tracking.”

What about implementation of all this new technology? “It really went without a hitch,” Crane said. “We were trying to find a one-stop shop, one platform where we could input all the data, get the information we need, and grow from there. The ease of product integration is why we went with Flex,” said Crane. With the T2 Flex integration, the LPR software allows the University to (a) see permits associated with those license plates and immediately know if they’re valid, (b) identify scofflaws, (c) introduce pay-by-plate technology at pay stations and mobile apps, and (d) allow the University to integrate products from additional vendors that are compatible with Flex.

Since implementation, Crane and her team have worked directly with Genetec on tweaking the LPR technology to meet their specific needs. They also rely heavily on the online T2 Customer Community for answers. “The T2 Customer Community has been very helpful,” Crane said. “We go there to see if someone else who has worked with this product has already asked the question we’re asking, rather than trying to figure it out ourselves—why reinvent the wheel? T2 also provided us with a product management team to work with so we can get the answers we need.”

The relationship between Binghamton and T2 is a long-standing one that has evolved over time to reflect the changing needs of the University—and help bring its parking operations not only into the 21st century, but poised to be ready for the next big thing. “I will be recommending the Flex platform and this LPR technology to other universities. I really believe it will pay off—our ROI will definitely be sooner rather than later,” Crane said.

“The folks at both T2 and Genetec really went out of their way to make sure that we had a product that was usable, efficient, and based on a timeline that we needed it to be,” Crane concluded.
To which we say, “Go, Bearcats!”

Back
← Thinking About Installing LPR? Here’s 6 Pieces of Advice from UWL Get to Know T2: Nikki Foust →
Skills Posted on